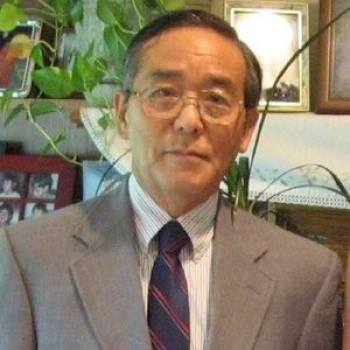 Tadashi Tokuhiro, 80, of Rolla, Missouri passed away peacefully on Tuesday, August 8, 2010 at Baylor Regional Medical Center, Grapevine, Texas (USA). Tadashi is preceded in death (2005) by his loving wife, Reiko Tokuhiro, of 49 years. He was born on February 26, 1930 in Yokohama, Japan. His father was a structural/architectural engineer for Japan’s Sun (Shell) Oil Company with ‘Western’ habits. He was the only son of two older and younger sisters. Both he and Yokohama were spared from the tragedies of World War II. He married Reiko on April 21, 1956 and they had 2 children, Asako and Akira.

Dr. Tokuhiro held a B.S. in Chemistry, Tokyo University of Science (1957). He attended Tokyo Institute of Technology and graduated with a M.S. (1959) and Ph.D. in Chemical Physics (1962). Early on he was a recipient of the ‘shin Matsunaga’ Prize for ‘promising young scientist’ for his work on electron spin resonance. He came to the U.S. and Columbus, Ohio on December 17, 1965 as a post-doctoral scientist with Professor Gideon Fraenkel at The Ohio State University. He later pursued a varied academic career at the following institutions: University of Detroit, Loyola University (Chicago), New Jersey School of Medicine & Dentistry, MIT, and the University of Missouri-Rolla. He was also staff scientist at the following institutions: Argonne National Laboratory (Solid State Science), MIT’s Francis Bitter Magnet Lab, Bruker-BioSpin Instruments/Bruker Analytische Messtechnik and Picker International (NMR/MRI). He had many good colleagues at these institutions. He obtained permanent residency and U.S. Citizenship (1976) via kindness of many but key individuals: Colonel ImObersteg (Pentagon) and Reverend R. C.  Halverson (Washington, D.C.).

Dr. Tadashi Tokuhiro moved to Rolla when his son Akira Tokuhiro obtained a professorship in the Department of Nuclear Engineering.  Dr. Tadashi Tokuhiro worked at Missouri S&T from 2002 to 2010, a few months before his death. He held the position of Adjunct Professor in the Graduate School and the Department of Chemistry, and he liked the position so much that he stayed in Rolla after his son moved to the University of Idaho in 2007. His research interests dealt with physical science and engineering application of gels, nuclear magnetic resonance (NMR) relaxation phenomena, molecular dynamics and characterization of bio-tissues by NMR methods. He studied hydrogel/polymer gels using NMR and reported that the characteristic time scales of phenomena at the nano-scale were different from those in bulk aqueous phenomena. Together with his son Akira Tokuhiro and Massimo “Max” Bertino, he was awarded various grants by the Department of Energy for nuclear energy engineering research (DOE NEER). They involved studies of metal binding capability of functional thermosensitive polymer networks and application of hydrogels to low level radioactive waste processing, enhancing reactor facility utilization at the University of Missouri-Rolla reactor.

In his spare time, he enjoyed listening to Bach Cantatas and classical music and singing. His membership and friendships in the Japanese ‘mokuyokai’ choral group span over 50 years. The choral group traveled to some of the following: von Trapp lodge, Bilbao, Rotterdam, Eisenach (J. S. Bach’s church) and the Mississippi River. He shared in the joys of the history of chemistry and physics in the 20th century. He also enjoyed driving, fixing, and commuting in his cars. He leaves many good friends in Columbus, OH, Novi, MI and MA. Later in life, he was interested in the origins of the ‘Tokuhiro’ name in Kochi City area, Shikoku (Japan).

He is survived by his daughter, Asako Fertitta (asakofertitta@sbcglobal.net) and husband, David, of Colleyville, TX; Akira Tokuhiro (akira.tokuhiro@gmail.com) and wife, Victoria Bañales of Idaho Falls, ID. He is also survived by grandchildren, Matthew and Milena Fertitta.

In 2011, the Southern Brazilian Journal of Chemistry included a 16 page tribute to Dr. Tadashi Tokuhiro and the last 2 pages consist of a list of all of his publications.  See:  Lavinel G. Ionescu, Tadashi Tokuhiro, Prominent Specialist in NMR Relaxation Phenomena and Molecular Dynamics, Southern Brazilian Journal of Chemistry 2011, 9 (9), 1-16. (PDF)

The above text is based mostly on the obituary by Akira Tokuhiro.