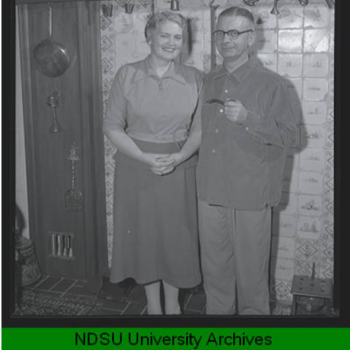 Dr. Wouter Bosch, Sr. and his wife Anna Christina. The tiles on the wall behind them are from the City of Delft, The Netherlands. They brought several tiles with them when they moved to the States.

He first came to America in 1929 to serve as a graduate assistant of Chemistry at the University of Minnesota. He also served as a professor of chemistry at Oklahoma Agricultural and Mechanical College in 1930 to 1931. In 1931 to 1933, he was a resident fellow of chemistry at the Iowa State College. In 1934 he went back to Holland to serve as a chemist manager, head lab technician director at H. Vettewinkel and Sons, Ltd. and stayed there until 1946. During World War II, Dr. Wouter Bosch was active in the resistance against Nazi Germany. As part of the national reflection on WWII, Dr. Bosch’s granddaughter Heather interviewed her father about her grandfather’s experience in the Dutch Underground in Nazi occupied Holland; watch the interview here.

After World War II, the Bosches made America their permanent home. He resumed a professorship of chemistry at Oklahoma Agricultural and Mechanical College from 1946 to 1947.

In 1947, he came to North Dakota Agricultural College (N.D.A.C.) to serve as the Chairman of Paints, Varnishes, and Lacquers. He was known for his hospitality and community involvement hosting several short courses for teachers and other chemistry professionals. His family added a rich cultural diversity in the area.

In 1958, he accepted a position of professor of chemistry at the University of Missouri School of Mines and Metallurgy. His wife, Anna Christina accompanied him to Rolla, Missouri. His son Wouter James (vice Hames) initially stayed in North Dakota for medical studies at the University of North Dakota and he completed his M.D. at the University of Missouri in Columbia, and later earned a Ph.D. in Orthopedics from the University of Iowa.  In 1965, Dr. Bosch became the Dean of the School of Mines and Metallurgy and was appointed to emeritus professor in 19__. They subsequently retired near Puget Sound in Washington State, where he continued to be active in the community and in the lives of his wife, children and five grandchildren until his passing in 1988.

Dr. Wouter Bosch was recognized in 1960 as the recipient of George Baugh Heckel Award of the Federation of Societies for Paint Technology and Service Award of St. Louis society in 1964. He was also a member of American Chemical Society, Royal Dutch Chemical Society and many other societies.

S&T students majoring in chemistry with an interest in paint and coatings are eligible for the awards from the The Wouter Bosch Endowed Scholarship Fund.  The chemistry department determines the number and amount of scholarships and criteria for nominating candidates.

The above text was taken mostly from the March 9, 1987 Issue of the American Paint and Coatings Journal.  See also http://www.digitalhorizonsonline.org/digital/collection/archives/id/1431/.