Dr. Webb began his teaching career at MSM-UMR as a graduate assistant in 1937. He became a full-time instructor in 1938 and, except for four years service in the U.S. Army during World War II, remained on the faculty until March, 1977. He served as chairman of the chemistry department from 1964-when chemistry and chemical engineering became separate departments-until September, 1976. Bill received his B.S. degree from Mississippi State University, earned his M.S. degree in chemical engineering from MSM in 1939 and later received a Ph.D. from the University of Wisconsin in 1949. Bill was a member of Phi Kappa Phi, Alpha Chi Sigma and Sigma Xi honoraries as well as the American Chemical Society. He retired from the U.S. Army Reserves as a lieutenant colonel in 1963. Bill's special field of teaching and research was analytical chemistry and radiochemistry. He received the MSM-UMR Alumni Service Award in 1977. At the time of his retirement in March. 1977, the Webbs moved back to Mississippi, only nine miles from the farm where Bill grew up. William Hamlet Webb died on May 6, 1989, in Louisville. Mississippi. He was survived by his wife, Ruby Webb, a son, three daughters and six grandchildren. Memorials may be made to the William H. Webb Scholarship Fund UMR Development Office.

The following text is reproduced from page 274 of the book “UM-Rolla: A History of MSM/UMR”, published on August 9, 2017, Missouri University of Science and Technology; see https://issuu.com/clwilsonlibrary/docs/um_history. 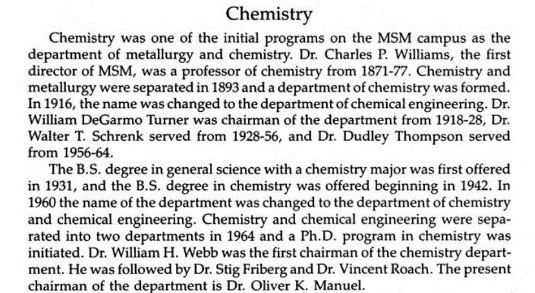 We also know a lot about Dr. Webb’s wife from the obituary of Ruby (Fogleman) Webb published in The Rolla Daily News from June 18 to June 19, 2019. 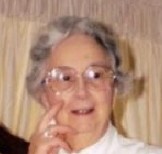 Loving mother, grandmother, world traveler, and volunteer Ruby (Fogleman) Webb passed away on June 9, 2019 in Kansas City, MO at the age of 102. She was born on August 29, 1916 in Miller County, MO, the second of four daughters of William F. Fogleman and Arie (Bunker) Fogleman. Because her father was a highway contractor, she moved 12 times in 12 years, often changing schools. She attended high school in Fulton, MO, graduated from William Woods College in Fulton with an Associate’s Degree in Education, and from the University of Missouri with a B.S. in Education.

She taught several years in Missouri public schools including those in Eugene, Valley Park, and Rolla. On May 22, 1942 she married William H. Webb in Kirkwood, MO. After his military service in World War II they lived in Rolla, Missouri, where Dr. Webb taught at the Missouri University of Science and Technology, formerly known as Missouri School of Mines (MSM) and then the University of Missouri, Rolla (UMR).  During the years in Rolla, Mrs. Webb was an active member in the First United Methodist Church of Rolla, The Coterie (a society of university faculty wives), the League of Women Voters and other organizations.

Following her husband's retirement in 1977, they moved to Louisville, MS where they were active members of the community in addition to belonging to the Louisville United Methodist Church. Mrs. Webb was a member of the Altar Guild, contributed to the Louisville History project, and formed many fond friendships. After her husband's death in 1989, she traveled the world with her sisters and friends. In 2000, she moved to Kansas City, MO, later moving to the Kingswood Retirement Community in 2006. She was a member of Central United Methodist Church in Kansas City, Elizabeth Benton Chapter of Daughters of the American Revolution and a volunteer at both Shepherd's Center and Kingswood. At Kingswood she volunteered in the library, served on the welcoming committee, and joined the knitting group. Over the years she made hundreds of knitted caps for newborns in several area hospitals.  One of her greatest joys was keeping in touch with her wide circle of friends and family through letters and phone calls.

The Webbs were the parents of four children who survive: William F. Webb (Judy) of Kansas City, MO, Ann Rea (Glen) of Bangor, ME, Mary Van Vlack (David) of Phoenix, AZ, and Linda Webb of Nashville, TN. Ruby Webb was the grandmother of six grandchildren and six great-grandchildren. She is survived by one sister, Pauline Meehan of Arlington, VA, and many cousins, nieces, nephews, and friends in Missouri, Mississippi and around the United States.

A memorial service (aka Celebration of Life) led by the Rev. Kathleen Danforth will be held at 11:00 AM, June 22 at the Kingswood Senior Living Community, 10000 Wornall Road, Kansas City, MO. Funeral services will be led by Rev. Mike Childs at the Porter Funeral Home in Louisville, MS on June 29 at 11:00 AM. Burial will be in the Methodist Cemetery in Noxapater, MS.

In lieu of flowers, the family suggests gifts to William H. Webb Endowed Scholarship Fund, Chemistry Department, Missouri University of Science and Technology, Rolla, MO 65409, Kingswood Foundation, or a charity of your choice.